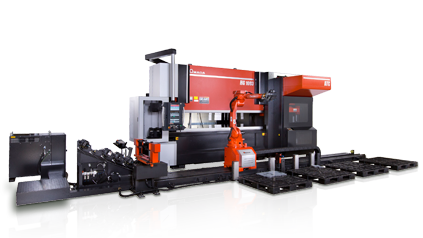 The combination of robots and modern press brakes permits unattended production that achieves high productivity and precision. The new HG-1003 ARs bending cell is for larger sheets not exceeding 1,000 x 800 millimeters. It is equipped with a robot that can support loads of up to 20 kg.

The combination of automatic robot systems with modern presses such as the HG series of servohydraulic press brakes offers enormous potential in terms of productivity. The HG-1003 ARs possess additional automation capabilities which increase precision and process reliability, on the one hand, and minimize tool set up times on the other. They can even be used to manufacture fairly small batch sizes economically.

The system make use of a 6-axis robot which moves on a linear track along the whole length of the press and which can therefore be flexibly loaded and unloaded at different positions as required. Furthermore, the HG-1003 ARs also possess an extended back gauge system which AMADA has re-engineered to provide even greater precision. Instead of two, there are now three stops – two as before for adjusting the depth of the part and a third for lateral alignment. If required, automatic readjustments are performed immediately in both the X and the Y direction. In the case of the HG-1003 ARs, the two back gauges can be adjusted to different depths in the X direction to permit the precise machining of even asymmetric parts (Delta-X function). At the same time, the ability of the robots to achieve optimum positioning at the back gauge has also been enhanced. They can not only move parts forward and backward but can also rotate them once they have reached the stop in order to ensure the correct bending position.

The possibility of integrating an additional camera system in order to avoid any positioning errors when picking up the sheets also helps ensure precise loading. This records the precise position of the workpieces, which may have been pushed together on the stack, and passes this information on to the robot. Even the tiniest discrepancies can be compensated for as early as sheet pick-up. Precision and process reliability during production are ensured by an integrated angle measurement system which monitors bending operations in real time. AMADA also exploits the considerable potential for automation in the bending cell's peripheral units. The robot changes the grippers automatically at the relevant gripper station as soon as it loads a new program requiring a change of gripper. An automatic tool changer is available for the HG 1003 ARs bending cells. When the program changes, this automatically swaps the tools and ensures that they are precisely positioned, thus eliminating the need for position checks. As a result, tool set up times are reduced to a minimum.